As skateboarding grows in recognition in China, is its future public or private?

For anyone skateboarding in China, it is hard to miss the explosion of private skateparks across the country in recent years. In Shanghai, private parks outnumber public ones. By conservative estimates, Shanghai has 5 private parks and 4 public ones. Add to this a new park that More Skatepark is in the process of building in Pudong, and that grand total might soon grow to 6. Most of the private parks were built in the past 2-3 years, whereas most of the public ones are 5 years or older. The development of private skateparks raises questions as to whether privately funded parks might be the new norm in Shanghai.

Skateparks started to be built in the mid-1960s. Most early parks were built in the United States and were geared towards transition skating. Some of the first parks were built and funded by private individuals. Over time, governments took notice of skateboarding as a popular recreational activity and started funding parks. In turn, the public/private skatepark classification came about. A conventional public skatepark is a park that is funded by the government and open to the public. Public skateparks are usually open for a long period of the day, are outdoor, and do not charge an entry fee. A conventional private skatepark is a park built, funded, and maintained by an individual or business, without public funding. Private parks are generally indoor, have limited hours of operation, and charge an admission fee.

Skateparks do not always fall neatly into the public or private type. Some parks have characteristics of both public and private parks. For example, DIY parks are built by private individuals, but they are sometimes located on land that does not belong to the builders. Some skateparks in Shanghai also blur the line between public and private. The Crab skatepark in Putuo was built by Avenue & Sons (a private business) and would therefore seem to fall into the ‘private’ category; however, The Crab is outdoor and does not charge an admission thereby giving it a sort of public feel.

Whether or not a skatepark falls neatly into the public/private category, one thing seems clear: most of the parks being built in Shanghai are privately funded. This phenomenon is not exclusive to Shanghai. In Suzhou, a city west of Shanghai, there are no publicly funded parks, but there are 2 privately-funded skateparks: one indoor and one outdoor. Both opened in the past year. The outdoor park was built and funded by a Suzhou skateshop owner, but the owner does not charge an entry fee nor is the park fenced off. The owner of that park described his park as “对外开放的” which means “open to the public”. 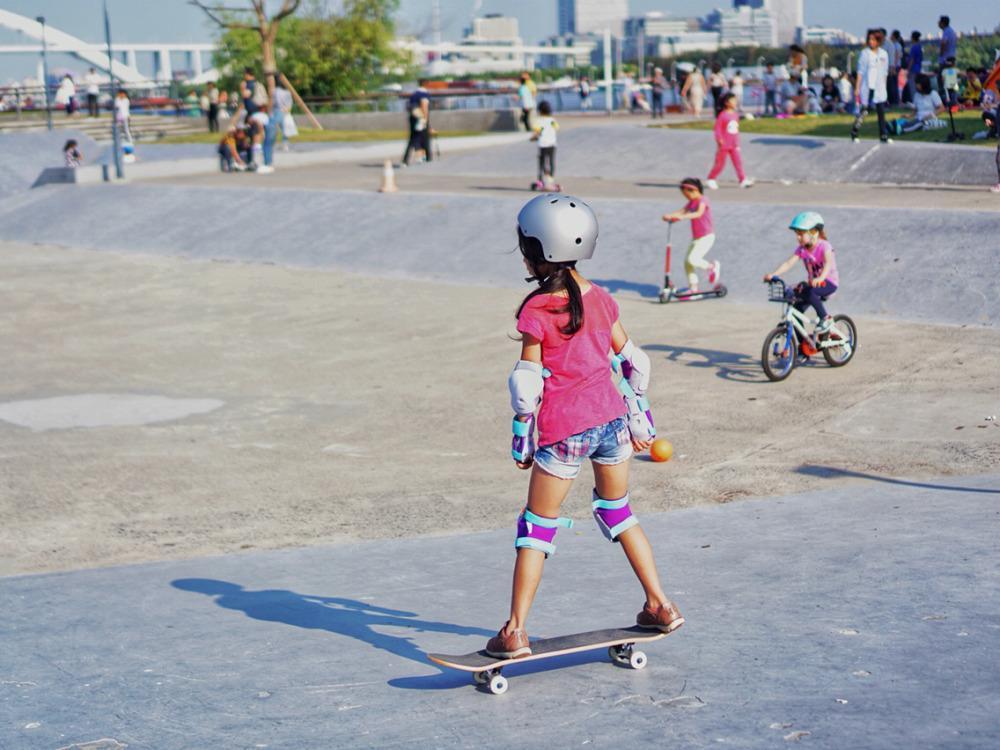 A typical scene at Shanghai’s Binjiang skatepark on weekends.  Having turned into a mad house of unsupervised kids running and skating around, it is largely avoided by skateboarders.

Shanghai currently has about 4 public skateparks: SMP, Binjiang, Lingkong, and Qibao. SMP and Binjiang are of questionable quality. Linkong Skatepark in Changning is probably the best of these parks; however, Linkong’s hours of operation are limited to 9a – 5p daily thereby making it inaccessible to many people (especially those who work regular jobs).

The lack of good public skateparks is not an issue for people who skate street. Shanghai has a plethora of amazing ledges, banks, stairs, plazas. But finding natural transition spots, ones whereas the transition resembles that of a ramp, can be tricky. Street “Jersey” barriers are one option, but skating a barrier is challenging for many. Banks are another option, but banks are also a different kind of transition on their own, ones without concave. For those interested in skating concave transition, skateparks are the best bet. SMP has a lot of concave transitions, but because it was built over 15 years ago the quality of the concrete has deteriorated. Nowadays, it is not uncommon to hear somebody comparing the concrete at SMP to sandpaper.

Lingkong park in Changning district.  The park, now open to the public 9am-5pm, was completed nearly 2 years ago, but it remained closed for most of that time until recently due to unresolved issues over park management and responsibility.

The lack of good public parks, especially ones with transition, is cited by skate park owners as a key reason for building their own parks. Leone, a part-owner of More Skatepark, an indoor skatepark near Hongqiao Airport in Shanghai, said that she and her partners started More after meeting two parents whose kids skated. “Their kids skated well, but they had no place to improve more. We could not even find a good mini ramp in Shanghai, so we started the place in May 2019, and the skatepark opened in October.” P.H., owner of NUP Skatepark in Changzhou, started his park for similar reasons. He said that he built NUP Skatepark because he wanted a place for him and his friends to skate. “Before NUP was built, most of the skaters and my friends only had flatground to skate.  Most of all, I wanted to have a bowl so bad! A bowl is so dope, but [bowls] are really hard to find,” he said.

While private skatepark owners often cite lack of good places to skate as a reason for building a park, it would be naive to overlook the profit motive. In some countries, like the United States, private skateparks are not known to be moneymakers, and many cannot last without government support or sustained donations. In China, building a private skatepark is expensive, but once it is built the owners can charge for a wide range of activities at a premium because of the lack of outdoor, quality public facilities. The biggest potential for profit is in the private lessons. More, NUP, Bzyyy, Ootoo all offer skateboard classes.

With an expanding middle class of families with leisure time, parents often shell out large amounts of money on after school activities for their kids, such as English classes or piano classes. Skateboarding is now also on that list. Classes at More, NUP, Bzyyy, and Ootoo are all targeted towards the youngster demographic, but they also offer classes for adults. Classes can be purchased individually, or in bundles, and are also differentiated according to whether the class is with a group or one-on-one with a coach.

Most of the private parks in Shanghai charge between 300-500RMB/lesson. More Skatepark’s prices are on the high end. They offer an 8-group lesson package for 3,600RMB which comes out to about 450RMB per class. Bzyyy and Ootoo’s classes are a bit cheaper but not by much. Bzyyy offers 20 group lessons for 6,980RMB which comes out to 330RMB/class. Ootoo sells a similar 20 lesson package for 6,600RMB.

To put these numbers into perspective, consider the cost of English classes in Shanghai. Learning Education (LE), an English training center in Shanghai, charges 16,980RMB for 48 group classes which is about 345RMB/class. If a parent had to decide between sending their kid to skate lessons or English lessons, they would find that there is not much difference in price.

In addition to the money charged from courses, most parks also charge an entrance fee and rent out their space for events.  But steady income from lessons, entry tickets, and rental fees does not always translate into profits. When asked whether their parks were profitable, Leon and PH both said that at present their parks were not. Leone said that the park was on its way to becoming profitable this year, but that they had used a lot of their proceeds to invest in building a new park in Pudong. “We invested a lot of money and this year it started to pay off. But we put a lot of this money into building another park in Pudong, so, at this point, we are not really profitable. Most of our earning is from training classes and some from renting space,” said Leone.

Skateboard coach Jamie leads a group lesson for kids in the bowl at MorePark’s first location in west Shanghai.

It is too early to say what the future holds for skateparks in Shanghai and China. (Maybe Decathlon will start building skateparks and offering lessons) Official recognition for skateboarding is growing in China, and novice skateboarders around China have more options for picking up the sport before taking it to the streets. In Shanghai, the government has funded parks, but the quality and accessibility of those parks is not great.  Whether or not the government feels any need to provide skateparks, let alone quality skateparks, for the populace is uncertain. According to OG, a skatepark owner in Changzhou, the government is not investing in skateparks because the sport lacks popular influence. “National sports have been promoted very early in China, but these sports are all conventional sports. For example, table tennis and badminton in China have developed a lot, and there are many people in many venues. But for skateboarding, which is a dangerous sport, most of them [governments] still have some prejudice against it,” he says.

City governments seem inclined to build riverside walking paths and basketball courts, but skateparks are a different story. A government that prides itself on protecting people might not see much value in building places where people can break themselves off. What’s more concerning is the government building a park that is not open to the public, but rather reserved for training purposes.

Maybe the idea of a truly public park in Shanghai – a park funded with tax dollars, free, open to the public from sunup to sundown – is naive. In Shanghai, we have seen a park built by the government that charges an admission fee and is only open at certain hours of the day. We have also seen an outdoor park built by a private developer that does not charge an entry fee and is open at all hours. Based on these experiences, future parks will likely have both public and private characteristics.

At present, a larger skatepark with a mix of street and transition is being built along the Huangpu waterfront. The park is rumored to be a collaborative effort between Vans and California Skateparks, and it will be built by the famous skatepark builder Zhou Wei. It is unknown whether the government is involved in funding the park. Based on photos of the work that has been done so far, and the fact that California Skateparks is involved, the park will probably be the best outdoor skatepark in Shanghai once completed. If the past holds any lessons though, the chances of this park being open to the public are uncertain. Will the park be free to enter, or will it charge a fee? Will it be open 7 days a week, or will it have strict hours of operation? Let’s hope it is more public than private.

Emmanuel, or “Manny” as his friends know him, is a skateboarder living in Shanghai.  You can catch him putting in an extra push or two at classic spots like Binjiang, Qibao, or more recently, the new Hongqiao Plaza.

Erik is a skateboarder living in Shanghai who designs offices during his day job, while climbing rocks, skateboarding, and nerding out on maps in his free time. @erikthorbeck